The project will include three concepts from Josh Thoma and Kevin Fitzgerald, who own and operate several restaurants including Burger Dive, Smack Shack and The Lexington.

“Josh Thoma and Kevin Fitzgerald are some of the most critically acclaimed restaurant operators from the Twin Cities, and we’re thrilled they have chosen to work with us to bring three restaurants to downtown Sioux Falls and the Steel District,” said Chris Thorkelson, President and CEO of Lloyd.

“This truly demonstrates the level of quality and investment we’re bringing to the Steel District. We know these restaurants are going to become fast favorites for locals and visitors alike.”

“We’re thrilled to partner with Lloyd on this new project,” Thoma said. “This is a tremendous opportunity to expand outside of the Twin Cities and we can’t think of a better location or partner to work with.” 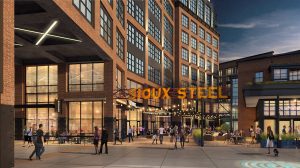 The riverfront concepts will be part of the first floor of the new nine-story office building planned for The Steel District. Combined, they’re expected to seat more than 500 people, with each restaurant offering patio space along with multiple interior dining and lounge spaces.

Thoma and Fitzgerald currently own and operate a diverse range of restaurants. Burger Dive serves a variety of bar snacks and burgers made from a custom grind in a fun, dive bar atmosphere. Smack Shack is a casual seafood restaurant known for its signature lobster rolls and lobster boil with locations in Minneapolis, Rosedale Center, MSP Airport and another location coming soon to Bloomington, Minn. The Lexington is an iconic restaurant in Saint Paul that originally opened in 1935. After a significant restoration, Thoma and Fitzgerald reopened the restaurant in 2017 with a menu featuring steakhouse classics served in an elegant dining room.

“Downtown has such a strong dining scene that it challenged us to find the right operators to offer something new and different,” Thorkelson said. “We think Josh and Kevin are going to hit the mark and create concepts that tie in so well to the office, hotel, and residential activity we’ll be bringing to the Steel District. Bringing restaurants from these professionals to Sioux Falls creates the atmosphere we have been working toward since we started this project and will be an incredible draw for our staff and clients.”

Lloyd will be moving its office into the new Steel District office tower from the nearby CNA building.

“We’ve seen firsthand the value for our team in offering a best-in-class downtown office environment,” Thorkelson said. “This location offers so much value – from Falls Park out your door to places to live on-site, to, of course, the outstanding dining options we’ve just announced plus more shopping, dining and entertainment ahead.”

The office tower also will include a second-floor coffee shop and fitness center.

Tenants, including the restaurants, can begin moving in during early 2023.

The Canopy by Hilton hotel will likely open 20 to 24 months after the start of construction, which could be yet this fall or early spring 2022.

“We’re excited to share more announcements in the coming weeks as we continue to secure commitments from tenants at the Steel District,” Thorkelson said. “Bringing these three restaurants to Sioux Falls will create the atmosphere we have been working toward since we started this project and will be an incredible draw for our staff and clients.”

Learn more about the remaining leasing opportunities at The Steel District.