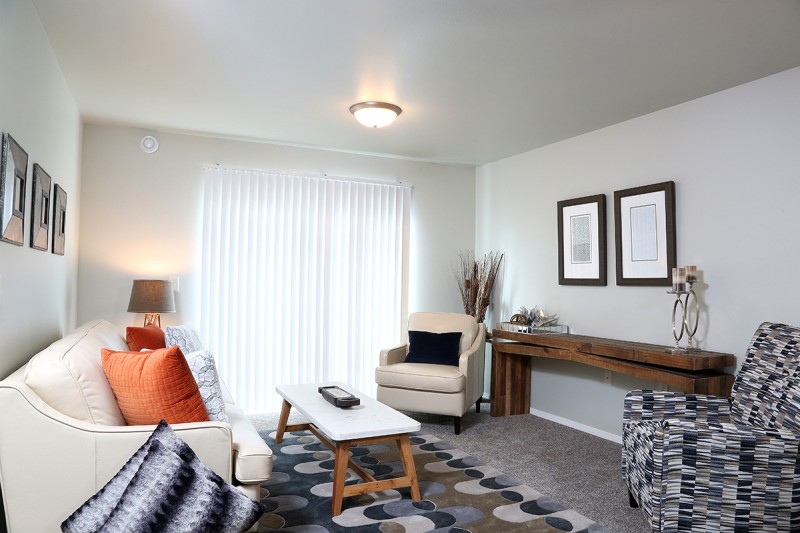 Our Moving Moments series captures current renters as they talk about living in our communities. Meet Mariah, one of our residents at The Meadows on Graystone in southeast Sioux Falls. Here’s her story:
Mariah ’s first apartment was a classic first place.

“It was a one-bedroom with no washer and dryer, no central air, and we were on the third floor so moving all our stuff was quite a hassle,” she says of the apartment on the east side of Sioux Falls.

“Moving it out, we had a little more motivation.”

That was earlier this year. Mariah and her boyfriend, Carl, now have settled into The Meadows on Graystone, a new Lloyd Companies community not far from 69th Street and Southeastern Avenue.

“I have a couple friends who live in Benson Townhomes, also managed by Lloyd, and we were trying to get in there and they didn’t have an opening,” Mariah said. “We still wanted to go with Lloyd, because every time we dealt with them, they were really nice and polite and willing to work with us.”

“ The y ’re such a nice color. And I liked how they were new construction and I would be the first one ever living in it,” she said. “The washer and dryer are so nice. We were use d to paying for our laundry and going to the laundromat, which was not my idea of fun.”

She also loves the neighborhood, within a block of a new Harrisburg Horizon elementary school and with plenty of space to walk her corgi, Quinn.

“The neighbors are great,” Mariah says. “We live next to a lady with a mobile grooming business, so in case Quinn ever gets muddy she can step right up and get washed up.”

Carl is enjoying the extra space for a “guy room like an office,” and Mariah has made a new friend in her property manager, Taylor.

“I lived with my sister before I was out on my own, and they cared, but not so much. You understood you were the tenant. It was kind of a distant relationship,” she explained.

“Taylor is so funny. She loves Quinn so much. She has a puppy herself and we share puppy mom stories, and every time we need something she’s quick to get it done. It feels like she genuinely cares that we’re happy and have everything we need.”

They are so happy with the new space, they aren’t thinking of another move for years, Mariah said.

“This is the last place we will be before we buy a house, so that will probably be four or five years. So we can save up for a down payment.”

To learn more about The Meadows on Graystone and other Lloyd communities, click here.